I feel an Ice wall between us,
at times I feel it melting and,
see the inner you;

But suddenly it becomes
frigid again,
I wish to break this wall,

One year over and many more to come...

Last year on July, 2004 I had started my blog. I wish to celebrate the completion of its one year. While writing this post I recollect a poem by Oliver Windell Holmes - (I have made some changes of course)

IF all the trees in all the woods were men;
And each and every blade of grass a pen;
If every leaf on every shrub and tree
Turned to a sheet of foolscap; every sea
Were changed to ink, and all earth’s living tribes
Had nothing else to do but act as scribes,
And for ten thousand ages, day and night,

I shall write, and write, and write,
Till all the pens and paper were used up,
And the huge inkstand was an empty cup,
Still would the scribblers clustered round its brink
Call for more pens, more paper, and more ink.

In addition to all these, the past year saw the birth of another blog or should I say a photo-blog.
Posted by Srikar at 7:55 PM 13 comments:

He had a terrible headache, even a walk 5 minutes ago didn't alliviate his pain. His pain reached far beyond the limits of what the material world can inflict. But he had to carry on. His mind was surrounded by a very few eventualities which the realm of any mortal mind could foresee. His purpose was not to do what he was doing, but fate had its way this time.
After entering his room, his eyes fell on his table where his worst fears lay. He knew he had to face it. He sat heavily on his chair. Beads of perspiration were dripping down his forehead. It was 9'o clock and time was running out. He forced himself to turn his head and look at the book. As soon as he saw it, his mind began to reel. Hardly would there have existed a book in the history of human civilisation which would have caused so much mental torture and agony. He opened the book and started to suck on its contents.
After 4 hours, without his consent 'sleep' - the brother of death overtook him. At 01:30, his mother comes into his room and finds his son fast asleep with his head on the table. Out of curiosity she lifts the cover of the book to see the title. It was written 'Total Quality Managment'.
Can you guess who the 'HE' in this story was ??
Posted by Srikar at 7:45 PM 26 comments: 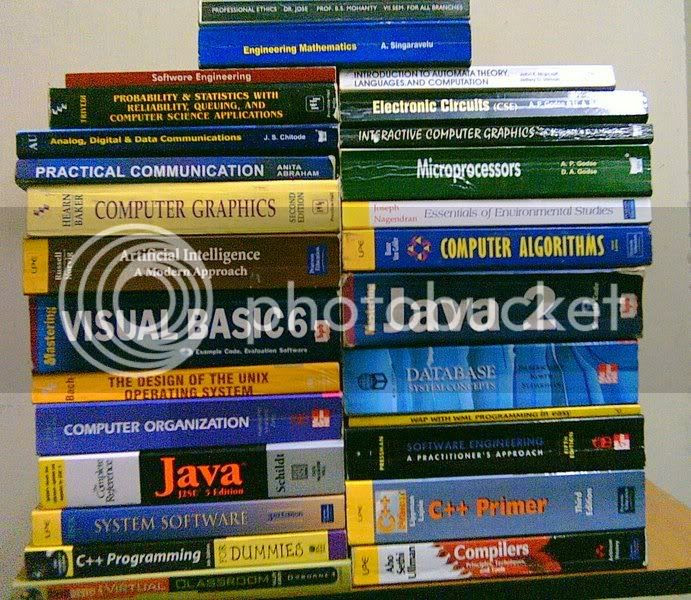 44 subjects and 16 lab practicals later it's over at last ! Well it was an amazing journey. Couldn't believe it got over so fast. . .
Posted by Srikar at 8:48 PM 36 comments:

Jimi Hendrix in the making

For the past 2 weeks or so I have been really busy with my guitar classes. It was my childhood dream to learn Banjo Eli, but I can settle with a guitar. I’m really proud of my guitar, since that’s what people do with it when they don’t know how to play. Here’s a picture of it, for all of you to drool and then drown in it . . . ; - )
Posted by Srikar at 1:10 PM 17 comments:

I haven't been blogging for the past 20 days. The reason being my darn camera. I'm too addicted
to it. My obsession with photography can be seen from the fact that in the past 2 months,
I have taken 800 odd snaps. Finally I have decided to make my photography public. I have started a photo blog named SnapShots2097. Another pal of mine who is also currently suffering from the
same disease is vivek.
Posted by Srikar at 12:05 PM 5 comments:

The finer things in life

· Sometimes it’s Tuesday and all day long you keep thinking it’s Wednesday. You cannot believe it that you are wrong and when you wake up the next day you are right all over again.
· Sometimes in your home as you go from one room to the other and as you enter the room you forget why you were there in the first place. At such moments 2 words float across your mind ‘ Alzheimer’s Disease ‘.

· Has it ever happened that you were talking to yourself when suddenly someone comes into the room and you have to make them believe that you were singing.

· Sometimes when you are sitting in a train and there is a train adjacent to yours, one train starts moving and you were not able to say which one of them is moving. Someone asks,” which one is moving ? “ . you say,” I guess that train . holy shit I can’t believe it. It’s our train that is moving”.

· When you are about to pick up a suitcase, has it ever happened to you that you thought it was full but actually it’s empty. During that split second you fell more powerful then you ever thought you could be.

· When you go to a park you see a chain fence. While running ( or moving ) when you look at the chain fence it appears to you that there was no fence at all. You go something like,” My god, where did the fence go?? I could bet it was right here”. It is what I would call ‘ The Chain-Fence mystery ‘.

· Sometimes you see dirt on some known acquaintance’s face and you try to point it to them so that they can clean it. Somehow they never seem to locate the right spot.

· In shopping malls where there are plenty of fluorescent bulbs and by chance you see yourself in the mirror. What you observe is indescribable. You could see your ugliest self emerge from nowhere. All the pimples, scars, acnes, spots, black heads, skin infections that you have ever had from childhood seem to come out at the same time.

· Sometimes you suffer from a bad cold ( everyone does ). You wake up in the morning and while brushing your teeth you sense a sneeze coming. And you don’t know what to do. Reluctantly you eat up the sneeze and hope you haven’t swallowed the froth along with it.

· When you are climbing the stairs, all confident and debonair. You suddenly stumble at the top. You thought there was another step but there isn’t. At such peril times when embarrassment stares you in the face you got to make believe the people around that what just happened is a habit of yours and that you do it all the time.

· Similarly when climbing down the staircase you stumble over and you could bet your life in the fact that there was another step their. Physically you feel your hips are in your chest but you cannot show such feelings. You wear a sheepish smile around your face as if to suggest that such things always happen.

· On a real hot day when you are licking on a cone of ice-cream you develop a frozen spot on the inside of the throat. It’s really irritating because you feel a tickling sensation and at the same time you can’t reach at that spot. After som time you feel alright and then what do you do? Eat more ice-cream.

· Some times when you fall asleep in the afternoon and wake up late in the night you are nonplussed as to whether it’s day or early morning. Sometimes you also forget what day it is. It’s what is called the advanced stages of Syphilis.

· When you are sleeping on a bed and your pillow falls down. When you look at it with one eye closed you fell as if the pillow was right in front of you. You could bet on that. But when you see with both eyes you see it ‘move’ down. It’s what I call the mystery of the moving pillow. I personally think this mystery is linked with ‘ The mystery of the Rail Fence ‘.

· Sometimes when you are pissing and you realize a sneeze is about to surface. You don’t know what to do. It is at these times that I appreciate the amazing complexity of the brain. It decides for me. It immediately instructs me to stop pissing and when you finish the sneeze you resume your uncompleted work again. The brain knows that if you do both the things at the same time you’ll blow your ass out !!

There are many more but I’m sure you understand what I’m trying to hint at. This article was to enlighten you and to encourage you to appreciate the finer things in life.

Srikar
Aah you wouldn't want to know about me. I'm just a menace to the Eastern Civization...